Apart from slip lining, the three techniques for rehabilitating large diameter mains with PE liner pipe are die drawing, rolldown, and folding, and in these three cases the liner pipe termination fittings must not be installed until the liner pipe has completed its reversion. Piecing up may take place only when recovery is complete. If recovery to tight fit has not occurred by the predicted time, the liner must be clearly marked with a series of graduations at each host pipe end, and piecing up should not start until no movement has occurred for at least twelve hours.

When full recovery has been achieved, final inspection carried out and the liner has been accepted by the client as being fully compliant, the liner pipe end can be cut to the appropriate length and an expander inserted to expand the liner to accept the fitting insert to enable jointing to a standard electrofusion coupling or mechanical fitting. 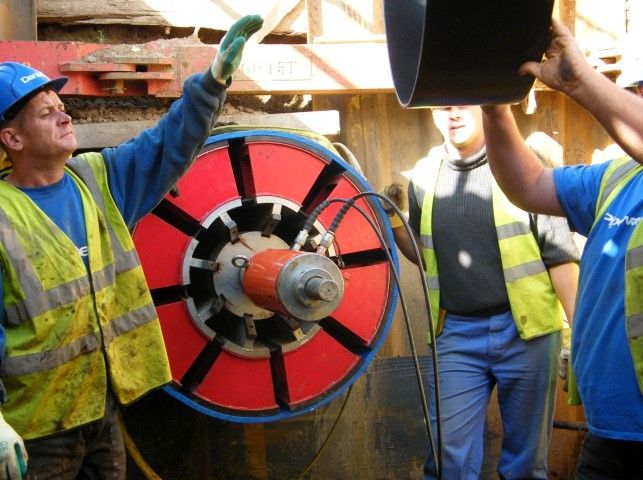 This picture shows a hydraulic expander in position having expanded the liner in preparation for a Transgrip fitting, with the insert just being lowered to the gang. The liner must be expanded sufficiently to ensure the insert can be driven fully home but must not be over expanded, and great care must be taken at this stage not to strain the liner pipe more than about 5% strain beyond its original (before reduction) diameter. Once that diameter is reached, the expander should be left in place for a few minutes which will slow down recovery, then removed quickly and the insert driven in. It is important that the insert is inserted immediately as the expanded pipe will begin to revert within seconds.

In preparation for the assembly, the insert should be in place, the surface of the liner pipe end carefully inspected for any damage such as scoring, particularly in the area where the seal will sit, and any such damage carefully scraped out. Any such damage should be no more than 10% of the pipe wall thickness. Then the fitting can be assembled in accordance with the fitting manufacturer’s instructions. The fittings should be carefully aligned with the host pipe, and under no circumstances should a fitting be canted in an attempt to align the flanges ready for piecing up. In other words, during the subsequent piecing up operation the flange of the ‘piecing up’ pipe must be aligned to the liner termination flange, and not vice versa. Where electrofusion couplings are to be used for the connection, alignment clamps must be used.

When installing gaskets or sealing rings, the components containing the seats for these gaskets or rings should be supported so that the seats are concentric. This is particularly important on large and therefore heavy fittings, and ensures that gaskets are not trapped and damaged, and that all the bolt tension is available for compressing the gasket or ring, and is not dissipated trying to pull the components into alignment.

For a typical old cast iron 1000mm diameter main laid in 3m sections, lining with PE pipe may necessitate the removal of as many as five or six sections, and as such mains were generally laid to follow contours and accommodate changes in direction by small deflections at each joint, the resulting ends to be ‘pieced up’ are seldom axially aligned. Moreover, because the liner termination fittings are designed to align axially with the host pipe, they must not be used to correct any such axial misalignment. If five host pipe sections have been removed, and if all the joints were being kicked in the same direction by say just one degree, for a change in gradient at an air valve for instance, the ‘piecing up’ assembly will have to accommodate an angle of six degrees, and this will result in a substantial thrust force which will have to be supported.

Until both liner termination fittings are installed, it is not possible to determine either the length of the ‘piecing up’ assembly, or the angle that it will have to accommodate, so the ‘piecing up’ pipes and fittings held on site must be able to provide an answer to a variety of geometrical problems, as well as supporting the thrust.

Probably the most cost effective approach, taking into account the cost on site of struggling with make up pieces for hours at a time, is an overlength make up piece. This will have one welded flange, a loose full end load flange adaptor for the other end, and a coupler with both angular capability and full end load resistance. By cutting the make up piece in a suitable position and using one, or in certain cases two couplers, it should be possible to cater for virtually any piecing up situation, with all necessary materials ready stored on site. It should be borne in mind that the make-up pipe can also be PE so that the benefits of the long life of PE are not compromised by the use of DI or steel.

Alternatively an Electrofusion coupling together with a PECat and flange adapter can be used and this will create an end load capable coupling.

Because of the risks associated with fitting failures on large diameter mains, each piecing up operation should be designed and supervised by an engineer. Any such failures are particularly dangerous during pressure testing, when higher pressures are generally involved, and no additional support or protection is available from backfill.

Also, because piecing up operations involve thrust containment, and the dangers associated with this, all fittings used should have adequate angular and end load capability, and must carry type test certificates from a third party approved test house In all cases adequate arrangements must be made for anchorage of the connections in accordance with local/national or Company codes of practice.

Following successful testing, gas connections will usually be made live to reconnect the liner pipe to the existing gas network. These live gas operations will utilise different equipment dependent on the diameter, operating pressure and material of the pipe. Regulations and codes of practice for such activities will vary according to network owners and National requirements.

SLIPLINING - TECHNIQUE Slip-lining is perhaps the oldest of all trenchless techniques. It involves the insertion of a new PE100 liner pipe of standard diameter and SDR into an existing pipe. Under...