When new pipe is to be installed or it is not possible to rehabilitate a pipe, so that it needs to be replaced but is in a congested area of buried infrastructure so that conventional methods such as bursting cannot be used safely, then a new or replacement PE100 pipe can often be installed by horizontal directional drilling. This method has a very small potential damage footprint provided that adjacent buried infrastructure can be accurately located.

This method is regularly used on distribution systems, which typically use small diameter mains, and on rural distribution systems it often enables mains to be installed alongside the carriageway without impeding traffic flow, as the drilling equipment is compact and self contained.

Where large parts of the route of the main are not accessible, such as for river crossings, horizontal directional drilling is a much less costly technique than tunnelling, and can be used for large diameters, such as trunk mains. For the larger diameters, the equipment is large, and requires support equipment such as generators and hydraulic power units.

This is a highly specialised technique, and needs an experienced and highly trained operating team, an essential member of which is the drilling mud technician, particularly on the larger diameters. This is not a technique to which the ‘lowest price wins the contract’ principle should be applied.

This technique involves drilling a pilot bore, generally along a closely defined shallow arc, and then, if necessary, enlarging the bore using a reamer or hole opener to create a bore large enough to accept the new PE100 pipe, which is generally pulled in behind a reamer.

The pilot bore is created using a drilling head, which in it’s simplest form has a slanted face, and this is pushed and rotated by long high tensile flexible drill rods. Whilst the rods are simultaneously rotated and pushed, the bore will, provided it is not deflected by some obstruction, proceed in a straight line, but if it is simply pushed without rotation it will deflect in the opposite direction to the slant face on the drilling head. 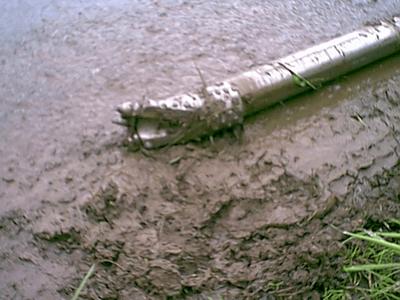 This picture shows a slant face drilling bit, also fitted with carbide tipped teeth that enable it to penetrate hard ground. Fluid can be pumped through the drill rods and out through jets in the bit to assist the operation

Pilot holes are enlarged in pre-reaming stages using a reamer (soft soils) or a hole opener (rock). Successive reamers of increasing diameter are used until the bore is of sufficient size to accept the PE100 pipe. A bore diameter of 1.2 to 1.5 times the PE100 pipe OD is normally required. 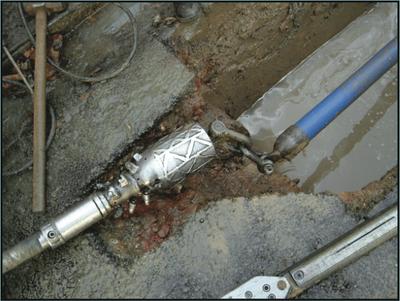 This picture shows a small barrel reamer attached to the new pipe ready to be pulled in.

Drill bit location for smaller and shallow installations is typically transmitted by a battery powered sonde, located just behind the bit, the signals being picked up by a receiver operated at the surface. 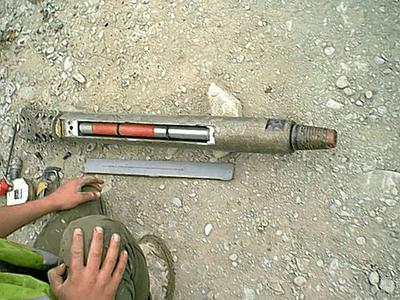 The image above shows a sonde and battery fitted inside a slant face drilling head. 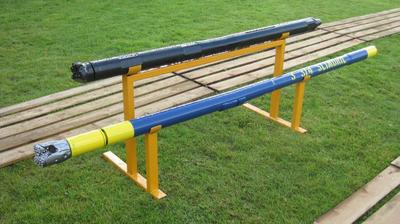 On inaccessible projects such as river crossings or where the bore is at significant depth and where a surface receiver cannot be used, the drilling head location information is typically sent from the drill bit by a wireline system, via a wire running along the inside of the drill rods.

Once the bore has been completed and reamed to the required diameter, the PE100 pipe is prepared for pull-back by attaching the end to a pulling head, swivel, reamer and drill rods at the drill exit point. Smaller diameter PE100 pipe can be pulled in directly from a coil trailer via a straightener re-rounder. For larger diameter pipes, which are supplied in straight sections, these sections should normally be fused together to form a single continuous length of pipe prior to commencing the pull-in operation. The staging of larger diameter and longer pipelines may require the use of pipe rollers and other facilities to ensure the pipe is not damaged during pull-back

Smaller drilling rigs suitable for installation of smaller diameters pipes are self-propelled rigs, typically track mounted, requiring little in the way of additional support equipment. The size, complexity and need for additional support equipment increases generally as the pipe diameter and length increase. At the "maxi" end of the range, several loads of equipment are typically shipped to site and the site area required is a significant consideration. 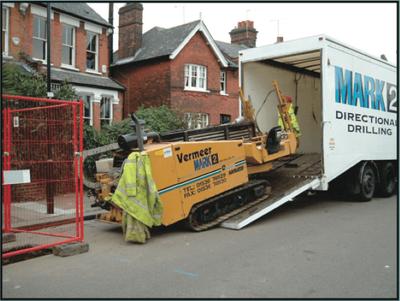 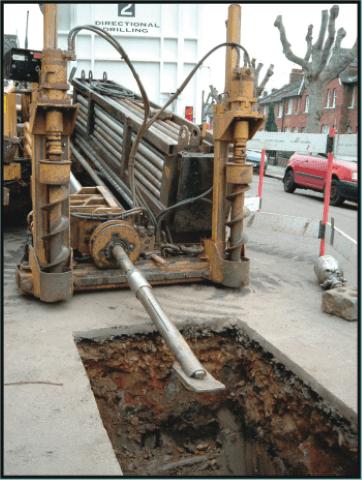 These two images show a small directional drilling rig being unloaded to install 100 metres of 100mm PE distribution main, and in place ready to start drilling. It is using a simple flat blade slant face head for drilling in clay, the excavation being typically sized for man entry piecing up. 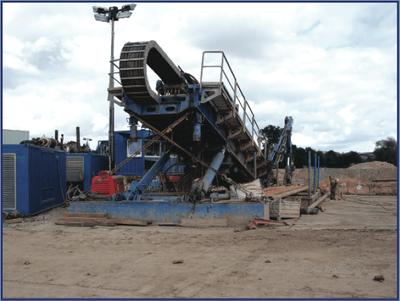 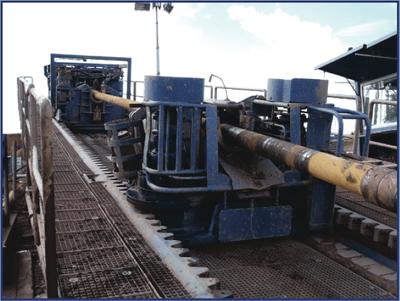 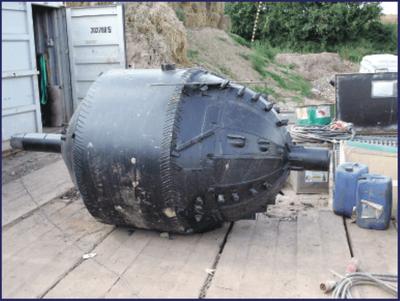 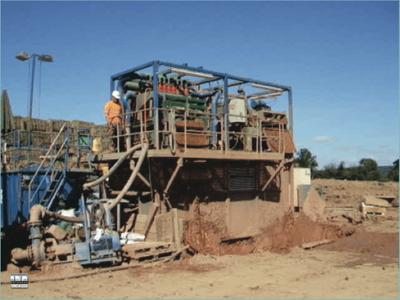 Coiled pipe generally has significant degrees of curvature and ovality, and as these prevent electrofusion (or mechanical joints) of good quality being produced, as well as increasing drag and the risk of scoring damage during insertion, the pipe should be passed through a straightener re-rounder before insertion. 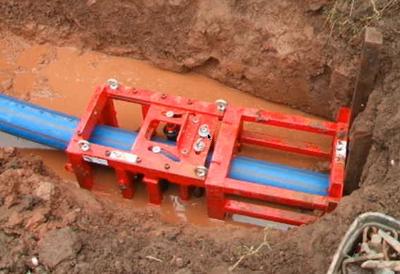 The image above shows a straightener re-rounder being used on a 180mm pipe, and whilst it is in the trench here, it can be attached to the coil trailer if so desired.

For diameters greater than 180mm, the pipe should be made into a continuous string by butt fusion of straight lengths, and sufficient space must be available on site to make up and store the string ready for installation. At no time during welding or installation must the pipe be allowed to drag on the ground and it must therefore be supported on rollers, though it should be stored directly on the ground to avoid indentations from supporting rollers or timbers if there is to be a delay in installation.

Most soil and rock types can be drilled with the appropriate tooling and processes. Soils containing high percentage of gravel and cobbles are best avoided unless the contractor is especially experienced in the conditions.

Special care must be taken with the pressure of drilling mud, especially when the operation is shallow. Drilling fluid may escape to the surface or other facilities unless carefully managed.

The full range of PE100 diameters from the smallest to a maximum diameter of around 1200mm can be installed by HDD, though the required installation length may limit the use of PE100 pipe even if a heavy wall pipe is used.

Installation lengths are typically 30m and greater. Lengths well in excess of 1000m can be installed with this technique, though depending upon the diameter required the limiting factor may be the axial load capacity of the PE100 pipe for pull-back into the bore.

Pressure capability is dependent upon pipe SDR and is not a function of the method. Typically a thicker wall is required for HDD pull-back capacity than is required for operating pressure.

The route of the new main should be carefully investigated to identify any potential clashes with existing buried infrastructure and, where necessary, the exact locations of any such clashes should be proved by trial holing.

The route planning should include subsurface investigations/survey to identify ground conditions, so that appropriate equipment can be selected. It is also important to identify areas of poor or difficult ground, such as gravel and cobbles, which could allow the drilling mud to escape or create bore instability unless an appropriately engineered drilling mud can be used.

This method applies tension to the PE100 pipe during installation. The tensile load on the pipe during installation must be calculated to establish whether it exceeds the maximum allowable load. Pipe manufacturers can advise on the allowable loads. If the calculation shows that the maximum permissible load may be exceeded then it may be necessary to increase the capacity of the PE100 pipe by increasing its thickness. This will require a check of ID and OD to ensure that flow capacity and external clearances are still adequate. During pull-in of the pipe a load link should be inserted between the swivel and the pipe to show and record the axial load applied.

Where cables and other utilities are identified in close proximity to the proposed alignment they should be exposed so that progress of the drilling can be monitored and stopped if required.

Coiled products should be restrained before being released or cut.

Reliable communications must be in place between the pipe entry location and the drilling rig operator, so the rig can be stopped immediately if required.

Monitoring and contingency planning should be in place prior to and during drilling below or in the proximity of environmentally sensitive locations.

At diameters up to and including 180mm the new pipe can be supplied as a coil, and this will be loaded into and dispensed from a coil trailer, positioned adjacent to or over the entry excavation. At 180mm the maximum length on a coil is generally 100 metres, and smaller diameters can be longer.

The two major sources of possible damage to the new pipe are excessive pulling force exerted if the pipe seizes during pull-back as might occur if some of the bore collapses, and scoring by any hard or rock fragments in the bore.

Because the operator of the drilling rig might not notice a momentarily excessive pulling force, a load link inserted between the swivel and the PE100 pipe to record pulling load can be used to record the maximum axial load exerted on the pipe. Certain users require weak links that fail before the pipe if overload occurs but this will result in a partly installed pipe with no means of completing the installation without major disruption, cost and delay. This is to be avoided if at all possible. The risk of scoring of the pipe can be minimised by ensuring the reamed bore is of sufficient diameter and properly cleaned and proved prior to pipe pull-back.

Pipes installed by HDD may increase in diameter, and therefore decrease in length, when pressurised, which will result in some axial tension. It is important that, if the pipe to which the new pipe is being connected has spigot and socket joints, which will have little end load resistance, means must be provided to absorb the axial tension.

Whilst the drilling equipment is able to drill down from the surface at the start and come back up to the surface at the exit, there does need to be an excavation at each end to act as a sump for drilling fluid reclamation, but the most critical factor is to provide the space to transfer the new pipe from ground level down to the bore, and this will depend upon both the diameter and length of the installed pipe. The pipe must be appropriately aligned with the bore and at an appropriate bending radius to avoid any risk of kinking.